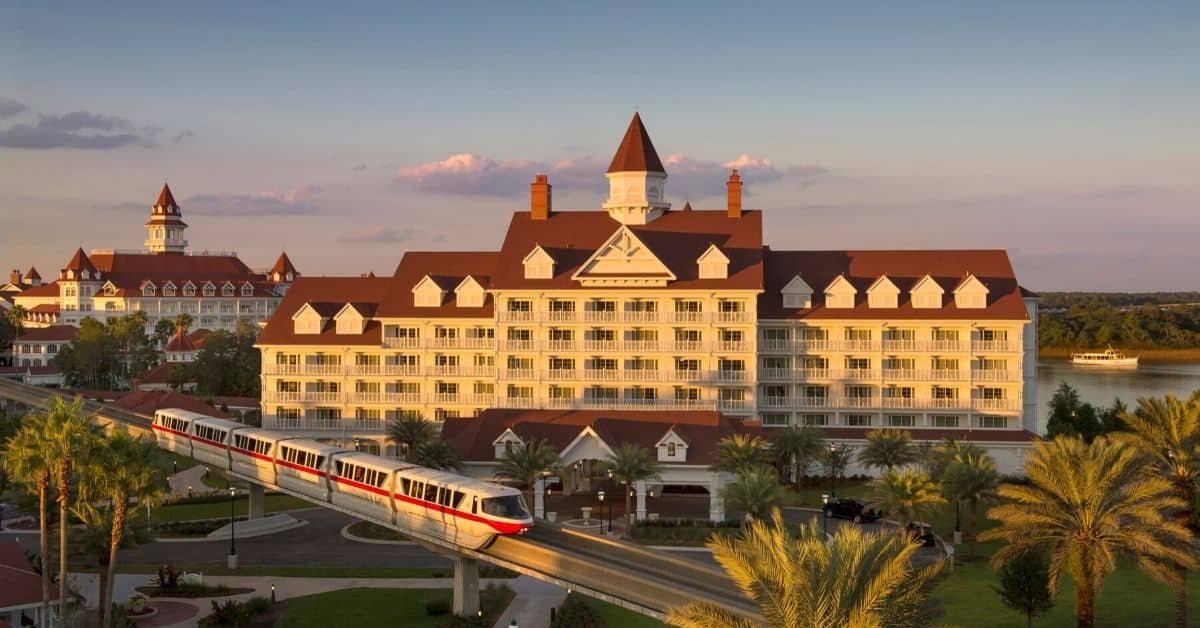 The Disney deluxe resorts at Walt Disney World are a diverse group of exceptionally themed hotels that boast plenty of luxury amenities. They are typically all 4 Diamond hotels with fitness centers, extravagant pools, and very easy park access.

Deluxe resorts are also known for their incredible dining experiences, including signature/fine dining and character buffets. The resorts are separated by region based on their nearest attractions: The Magic Kingdom, Epcot, Disney Springs, and Disney’s Animal Kingdom.

The Magic Kingdom area has the largest number of Disney Deluxe resorts. There are two sections of this resort area: the Seven Seas Lagoon and the Bay Lake area.

The Seven Seas Lagoon section is where the very first Walt Disney World hotels were built. These Disney hotels are connected to the Magic Kingdom via the monorail loop.

The Contemporary hotels is an A-Frame steel building with modular construction that houses Disney’s Bay Lake Tower. This Disney Vacation Club hotel is home to the Top of the World Lounge and its own members-only pool. Not only does the Contemporary hotel have an amazing view of Cinderella’s Castle, but it’s also just a short five-minute walk from the hotel to the park entrance.

The Polynesian Village resort & hotel, a family favorite, has a peaceful sense of an island paradise that feels like you’ve left Florida for a tropical getaway. The amazing dining and laidback feel makes the Poly a great choice for families.

Adults will love visiting Trader Sam’s before sitting on the beach to catch the Magic Kingdom’s Nighttime Spectacular, Happily Ever After.

Right next door to the Polynesian you will find the opulent Grand Floridian, a Victorian-style hotel. This decadent Disney resort has a must-see lobby that’s filled with music from the resident piano player and the talented Grand Floridian Orchestra.

The Grand Floridan also is home to many delicious restaurants and, during the holidays, the famous Gingerbread House.

Bay Lake connects to the Seven Seas Lagoon, and this body of water hosts the wilderness themed hotels on the property. Wilderness Lodge is the only Disney Deluxe hotel currently on Bay Lake, although the cabins at Fort Wilderness have similar rates.

At this time Reflections, a lake-side lodge is under construction. Reflections will be a Disney Vacation Club resort.

The Wilderness Lodge allows guests to escape reality and explore the Great Northwest. Inspired by turn-of-the-century National Parks, the craftsmanship at this Disney deluxe resort is a must-see.

Soak in the peacefulness of the great outdoors on the beautiful nature trails or while enjoying rocking chairs that overlook a bubbling creek.

Epcot has three Disney Deluxe resorts located within a circle, and are just minutes away from each other on foot. They are arranged around Crescent Lake, just outside the International Gateway to Epcot.

Disney World’s newest Disney Vacation Club hotel, the Riviera, is themed and inspired by Walt Disney’s tour of Europe in the 1930s. This deluxe villa hotel has quick access to Hollywood Studios via an easy ride on the Skyliner.

Disney’s Boardwalk Inn is an attraction unto itself, and the shopping, dining, and nightlife draw in many resort hoppers and Epcot day guests.

The turn of the century Boardwalk atmosphere spills out onto the beautifully landscaped lawn where families often picnic and play.

Strolling the Boardwalk at night is an amazing experience with the light running along the water, delicious smells that fill the air, and the music that gets your foot tapping.

The Beach Club is a Disney Vacation Club resort and more family-oriented than the Yacht Club. Both deluxe resorts share amenities, including the popular sand-bottom pool.

Within walking distance of Epcot’s International Gateway, it’s also easy to jump on a boat for a quick boatride to Disney’s Hollywood Studios Park.

Typically, you will find Disney Deluxe Resorts near a Disney theme park since part of their appeal is park accessibility. However, some people like to get away from things a bit, which is a benefit of Old Key West and Saratoga Springs.

Both of these Disney deluxe resorts are on the banks of the Sassagoula River, just a short boat ride away from Disney Springs and endless shopping, dining, and live entertainment.

Saratoga Springs is the only Disney resort other than the Grand Floridian to provide Spa services. This Disney deluxe resort’s racehorse theme is based on upstate New York’s vibrant racing tradition.

With mulitple pools and being within walking distance of Disney Springs, Saratoga Springs Hotel & Spa is a great choice for families and adults. Golfers will especially love the world class Lake Buena Vista Golf Course.

The resort also has fun activities like surrey and bike rentals so your family can see the resort from a different point of view.

Old Key West is the first Disney Vacation Club resort. It’s laidback vibes feel like a Florida vacation should feel. Spend time relaxing in a hammock or exploring one of the deluxe resorts many pools.

Old Key West is home to Olivia’s, one of our favorite places to grab a late dinner or quiet breakfast before hitting the parks.

However, although some may feel that the location is less than ideal, it remains at the top of my list of favorite Disney deluxe villas when we visit Disney World.

The Animal Kingdom Lodge has more hotel activities than the other resorts in addition to some of the best dining experiences. The pools are outstanding and the Savannah setting where African animals roam free is priceless.

There’s no shortage of beautiful views, amazing food, and relaxing pools at Disney World deluxe resorts. There’s so much to do at each one, you almost don’t need to visit the parks when you stay at one of these gorgeous hotels!

Are Disney deluxe resorts worth it? You’ll have to decide for yourself, but you’ll certainly never regret the experience if you do decide that Disney World deluxe hotels are a part of your vacation plans.

Pin it for later!

Get details on Disney World’s moderate and value resorts as well, so you can make the best decision of your next trip.